Saffron Books, founded in 1989, is a long established imprint offering book titles on art, archaeology and architecture, art history, current affairs and linguistics. Saffron Books titles are distributed and marketed worldwide by Saffron Distribution as well as all major physical and internet outlets, including Amazon. 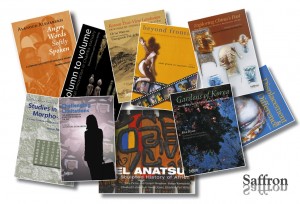 All Saffron titles can be ordered from EAP Saffron Online Bookstore, which incorporates SAFNET. If you are a commercial bookseller, mail order agent or represent a university bookstore you may wish to take advantage of various discounts, incentives and special deals offered by Saffron Distribution.

Notable among Saffron Books ongoing series of books and monographs are the following: 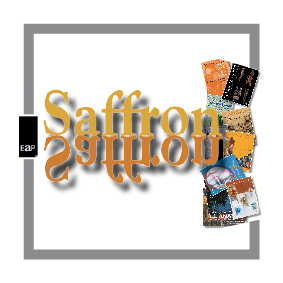 Queries about Availability, Price and Delivery

If you do not find what you are looking for using the search function on this site or would like more information please contact us at saffron–at–eapgroup.comMore about Saffron Books

Let there be Light! Nour Festival offers hope in creativity

Posted by Editor on 10:02 in ARTISTS, Contemporary art and modern art from the Middle East & North Africa | 0 comments 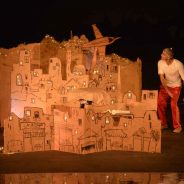 London’s annual Nour Festival returns to the multicultural metropolis 20 October-6 November 2016, promising to highlight “the best of contemporary arts and culture from the Middle East and North Africa.” Sadly the festival’s overarching mission is challenged and overshadowed by unprecedented turmoil and fragmentation in the region it celebrates and  showcases. As the five-year-old festival’s audiences have come to know, nour means light in several languages of MENA. The word is replete with secular and religious,...

Posted by Editor on 23:49 in Featured, Saffron Asian Art and Society Series | 0 comments 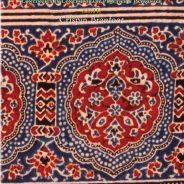 Crispin Branfoot, editor of the book, Traditional Arts of South Asia: Continuity in Contemporary Practice & Patronage, introduces key topics and authors in this ground breaking new publication, published by Saffron: What are the proper subjects for a study of the arts of India? If we were so bold as to define ‘the canon’ of South Asian art, even when the very idea of the canon has been subjected to so much deserved criticism, scholars would probably agree about the main elements.  We would want to examine the historical development and... 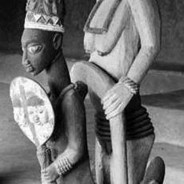 William Fagg and the Study of African Art, an international conference at the Courtauld Institute of Art, celebrates Africanist William Buller Fagg (28 April 1914–10 July 1992) and his arguably immense contribution to the study and (perhaps equally important) appreciation of African art in Britain and elsewhere. Fagg was the Keeper of the Department of Anthropology at the British Museum (1969–1974) and, as it transpired, a pioneering historian of Yoruba and Nigerian art, with a particular focus on the art of Benin, diversifying later as...

Posted by Editor on 11:42 in Awards and Prizes, Contemporary and modern art from Japan and Japanese communities, LISTINGS, People | 0 comments 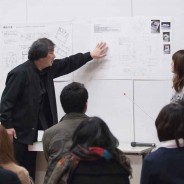 The 2014 Pritzker Architecture Prize has gone to Shigeru Ban, celebrated for his fusion of contemporary architecture with humanitarian values and innovative use of everyday and found materials. Ban, 56, professor at Kyoto University of Art and Design, will receive the award, often equated with the Nobel Prize in the field of architecture, at a ceremony 13 June 2014 at the Rijksmuseum, Amsterdam. Kyoto University said the award “reveals Ban’s three faces: a world renown architect, a supporter of disaster-stricken areas, and an educator... 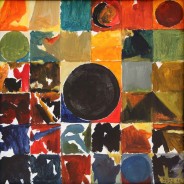 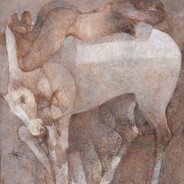 The first thing to consider about Jamil Naqsh & Najmi Sura: An Epic Romance, the exhibition at London’s Albemarle Gallery (5-28 June 2014) is how long it has taken this joint show to materialise, writes SAJID RIZVI. Neither Naqsh nor Sura are spring chicken and while Naqsh has accumulated fame and fortune his lifetime muse Sura has practiced her art virtually in purdah. Previous appearances of her art have occurred more often in international auctions than in grand events celebrating only her work. This show almost reaches that...

Last of the master: Final paintings of M F Husain 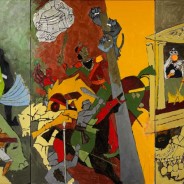 Nine paintings by the late M F Husain (1915-2011), described as his final major works before his passing, are on public display at the Victoria and Albert Museum, London, 28 May–27 July 2014, writes SAJID RIZVI.   It’s a poignant tour de force and a foretaste, interrupted, of what could or would have been a sumptuous feast of Maqbool Fida Husain’s creative expression had he not died in self-imposed exile in London. Husain generally is believed to have been hounded out of his native land by intolerant and unappreciative... 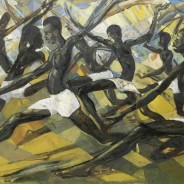 More African individuals and businesses are spending on or investing in art than a few years earlier, with the focus on contemporary art produced by artists on the African continent or in  locations elsewhere , anecdotal evidence and art market trends suggest. There’s also an emerging trend toward restitution of historical cultural materials now outside Africa. At Bonhams’ sale 21 May 2014, entitled Africa Now and billed by the auctioneer as a celebration of art from across the African continent, the works that drew most buyers...

Posted by Editor on 10:48 in ARTISTS, Contemporary art from Africa and African communities, LISTINGS, NEWS | 0 comments 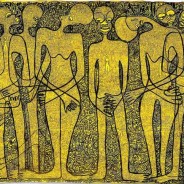 Chronicles of The Enchanted World is the title of a selling exhibition of a selection of paintings and sculptural installations by Victor Ehikhamenor, on display 21 May -19 July 2014 at London’s Gallery of African Art, writes SAJID RIZVI.  Ehikhamenor’s reputation traverses disciplines. He’s an artist and photographer, raconteur and writer of short stories and, imminently (we hear), a novel.(1) There’s something naughty and noble about that ever expanding repertoire of this artist, born in Udomi-Uwessan, Edo State, Nigeria,...

Madagascar, but not as your kids know it

Posted by Editor on 12:08 in ARTISTS, Contemporary art from Africa and African communities, LISTINGS, NEWS | 0 comments 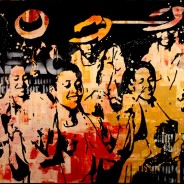 Thanks to the ongoing Dreamworks franchise (there may be a fourth animated sequel soon), Madagascar is firmly and mirthfully on the world map, its mind-boggling menagerie embedded deep into the consciousness of children who’ll soon be teenagers, given the series’ debut in 2005, and surely will be taking their toddler siblings along a well-beaten path, writes SAJID RIZVI. But there’s another aspect to the art of Madagascar that’s currently having its very timely and well-deserved exposure in London’s Gallery of...

Posted by Editor on 11:12 in ARTISTS, Contemporary and modern art from the Chinese world and Chinese communities, LISTINGS, NEWS | 0 comments 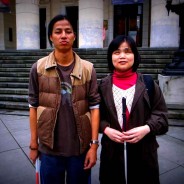 This year’s edition of the annual Chinese Visual Festival in London is in full swing, offering audiences opportunities to get up to speed with new talent and new trends in Chinese cinema, from the mainland to countries and regions contiguous in cultural or historical terms. Mainstream moviegoers, having been introduced to Chinese cinema through circuitous routes including Hollywood and Hong Kong, are only now beginning to catch up with a virtual explosion of growth in mainstream film-making. A general tendency to compare the growth in... 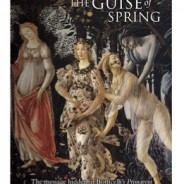 A new book, Under the Guise of Spring, by Eugene Lane-Spollen, argues for a game-changing message believed to be hidden in Sandro Botticelli’s universally important masterpiece, Primavera, writes SAJID RIZVI. Also known as Allegory of Spring, the tempera panel, about two metres tall and a little more than three metres wide, is currently housed in the Uffizi gallery in Florence. The painting generally is believed to have been started and completed during the Italian Renaissance, between the period 1477-1482. Primavera/Allegory of Spring has...

Posted by Editor on 23:38 in ARTISTS, Contemporary and modern art from Japan and Japanese communities, LISTINGS, NEWS, People | 0 comments 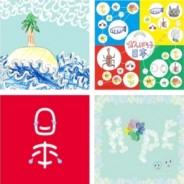 Yasashii Hankachi: Gentle Heart Project / Handkerchiefs for Tohoku Children, at the Daiwa Foundation Japan House galleries, is a creative response by children and collaborative designers in Japan to the devastation left by the 2011 earthquake and tsunami in the Tohoku (northeast) area of Japan, in which more than 18,000 people lost their lives and many more faced the difficulties of being relocated, leaving a strong impact on local communities. The exhibition centres on handkerchiefs created by children and graphic designers working in...

The horse in contemporary art 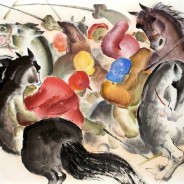 Have you featured the horse in your recent artistic activity? The Editor would like to hear from you. Please send image, description, date and artist statement, if applicable. Happy New Year. Of the Horse! Click here to contact the Editor 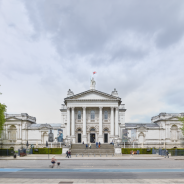 A pop-up garden as art is the highlight of summer at Tate Britain, opening 23 June and going on to 23 October 2018. And visitors can consume this art, not just in the jargonesque sense as defined by art history. The gallery’s front lawns will be transformed into A Common Ground, a working garden led by artist collective Something & Son. The space will be a community garden welcoming the public through a daily programme of activities and one-off special events. Tate says A Common Ground aims to increase communication and connection... 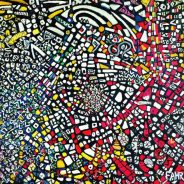 Come this June (2017), Tate Modern celebrates the life and works of Princess Fahrelnissa Zeid, an artist who can rightly be seen as one of the female pioneers, in the wider Middle East and North Africa (MENA) region, of both modernism and abstraction in a western sense, responsive to western aesthetics and sensibilities. Abstraction, through reinterpretation of Arabic/Farsi/Osmanli/Urdu calligraphic forms, isn’t new to a region that, in Asia alone, stretches from Afghanistan, post-Mughal South Asia and Iran to the Arabian peninsula and...

Posted by Editor on 13:14 in Featured, SaffronBooks | 0 comments 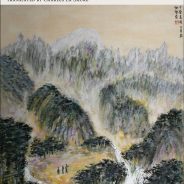 After many years of exhaustive preparation, Cho Dong-Il’s History of Korean literature finally enters the public domain. It is a magisterial work by Professor Cho Dong-il, translated by Charles La Shure, and more than a decade in the making in its English version. More than 940 pages and priced at GBP 950.50 this remarkable story of Korean literature through the ages is based on a six-volume original in Korean by Professor Cho. Published by Saffron Books, an imprint of EAPGROUP International Media, translated by Charles La Shure, this History... 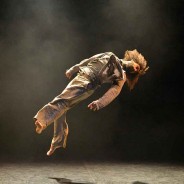 The annual Nour Festival in London’s cosmopolitan Chelsea and Kensington neighbourhoods launches its fifth cycle this week with an expanded cultural programme focused on contemporary Middle Easter and North Africa (MENA) and its varied British and European connections. Spread across numerous venues in the Royal Borough of Kensington and Chelsea, home to citizens and residents of great cultural diversity, the six-week festival celebrates contemporary art including music and dance, film and video, cuisine and material culture, its...

Posted by Editor on 12:29 in ARTISTS, Contemporary and modern art from the Iranian world, LISTINGS, NEWS | 0 comments 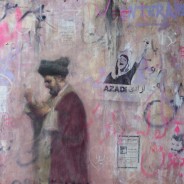 The extraordinary painterly explorations by Darvish Fakhr finally get a dedicated exposure in the artist’s solo exhibition at EOA.Projects, aka Edge of Arabia, in southwest London’s slowly regenerating Battersea Thames riverside, writes SAJID RIZVI. It’s a tightly edited, evocative oeuvre that’s on view at the gallery, a culmination of several years of work informed or influenced by visits to native Iran. Remaindered materials and memories from a fire that gutted Fakhr’s Brighton studio and cost a homeless man seeking warm shelter there his...