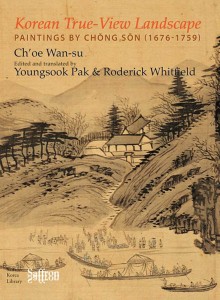 Korean True-View Landscape: Paintings by Chðng Sðn (1676-1759), a ground-breaking, revised and updated English-language edition of Kyomjae Chong Son chingyong sansu (The Art of Kyomjae Chðng Sðn) by Ch’oe Wan-su, has resulted from many months of painstaking work by Dr Pak Youngsook and Professor Roderick Whitfield, of the School of Oriental and African Studies (SOAS), University of London. Buy this book.

Thoroughly updated by the two authors, the book includes many new features, including maps and a chronology, plus comprehensive indices, developed by the editors/translators.

Korean True-View Landscape: Paintings by Chðng Sðn (1676-1759) provides an unprecedented insight into the distinctive art and literati culture of Korea in the early eighteenth century. Chong Son’s albums of landscape paintings celebrate the scenic beauty of Korean rivers and mountains, focusing on the capital Hanyang, now Seoul, the Han River, the East Sea and the world-famous Diamond Mountain. The author, Ch’oe Wan-su, Chief Curator of the Kansong Museum in Seoul, presents travelogues and poems by Chong Son’s contemporaries, scholars and officials who were inspired to compose those remarkable texts when they too visited the same landmarks.

Korean scholars habitually wrote in Chinese, and frequently referred to Chinese paragons of landscape beauty, even while extolling the superior virtues of their native land. Some of them travelled as diplomats to the Chinese capital and even sold Chong Son’s paintings there at a handsome profit, though the artist himself had no opportunity to visit China or see Chinese paintings at first hand. Accordingly, this book illuminates contemporary relations between the two countries, as well as introducing each site in detail and explaining typical features of Korean architecture and customs.

This edited translation has been thoroughly prepared for western readers, both students and the general public, and provides additional explanatory notes and maps, not included in the original Korean edition.

In addition to Korean True-View Landscape: Paintings by Chðng Sðn (1676-1759), Saffron Korea Library features a number of other important titles incorporating translations from the existing body of literature on Korea. Buy this book.

About the Author and Editors

Ch’oe Wan-su studied Korean History at Seoul National University (SNU). After finishing his degree at SNU in 1965, he worked as curator at the National Museum of Korea. Since 1966 he has been Chief Curator at the Kansong Art Museum in Seoul. He has taught graduate courses at various institutions, including Seoul National, Yeonse, Ehwa, Dongguk, and Chung’ang Universities. He has written articles and books on Buddhist art and Korean temples, Korean calligraphy, especially on the calligrapher Ch’usa Kim Chong-hi, and the true-view landscape paintings of Kyomjae Chong Son.

Youngsook Pak studied at Ewha Woman’s University in Seoul, and at the Universities of Bonn, Köln and Heidelberg in Germany, obtaining her PhD at Universität Heidelberg in art history and sinology. She has organised exhibitions of Korean art in Ingelheim, Germany and in the British Museum. In 1989 she established courses on Korean art history in the Department of Art and Archaeology, School of Oriental and African Studies (SOAS), University of London, where she still teaches. She has written articles and books on ancient Korean art, Koguryð murals, Silla royal tombs, and Korean Buddhist art.

Roderick Whitfieldstudied at SOAS and at St Johns College, Cambridge, and wrote his PhD on Song painting in Princeton University, returning in 1966 to St Johns College as Research Fellow and was appointed Assistant Keeper of Chinese art at the British Museum in 1968. In 1984 he was appointed Professor of Chinese and East Asian Art at SOAS and Head of the Percival David Foundation of Chinese Art. An international authority on Chinese painting and Buddhist art, he has written numerous articles and books. With Youngsook Pak, he organised the exhibition Treasures from Korea at the British Museum, and co-authored volumes in the series Handbook of Korean Art. Buy this book.