Posted By Editor on Feb 28, 2017 in Featured, SaffronBooks 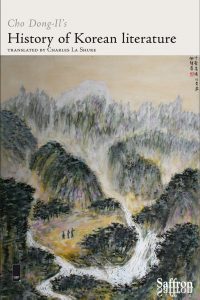 After many years of exhaustive preparation, Cho Dong-Il’s History of Korean literature finally enters the public domain. It is a magisterial work by Professor Cho Dong-il, translated by Charles La Shure, and more than a decade in the making in its English version. More than 940 pages and priced at GBP 950.50 this remarkable story of Korean literature through the ages is based on a six-volume original in Korean by Professor Cho.

Published by Saffron Books, an imprint of EAPGROUP International Media, translated by Charles La Shure, this History [ISBN 9781872843339] traces the development of Korean literature from its beginnings in paleolithic times through the ancient and medieval eras, the important transition from medieval to modern Korea, and the Japanese colonial period, which ended in 1945.

In this mammoth book, Dr Cho Dong-il offers a comprehensive examination of the history of Korean literature, both written and oral, and inquires into its relationship with world literary history. He places Korean literature within its proper cultural, philosophical and political contexts, tracing the threads that run through it from ancient times to the 20th century.

A pre-eminent scholar of Korean literature, Cho Dong-il demonstrates how inextricably the threads of history, literature, and philosophy are interwoven, providing the necessary background to understand Korean literature as an unbroken tradition of thousands of years. His theories of literary branches and tendencies, as well as his unique understanding of the relationships between historical eras, provide a deeper and more flexible framework for interpreting Korean literature than traditional genre and periodization systems. Lastly, he goes beyond regional boundaries to examine the place Korean literature occupies in world literature.

This English translation of the five-volume original serves as a foundation for and stepping stone to further study of Korean literature.

About the Author
Professor Cho Dong-il has been has been teaching Korean literature for 45 years, primarily in Korea but also in France, Japan, and China. He has spoken to academic audiences in sixteen countries around the globe. His contributions to the fields of Korean literature and Korean Studies include over seventy books and over two hundred papers; his latest book, A Theory of Learning (2012), serves as an approachable introduction to and summary of his vast body of research. He is currently professor emeritus at Seoul National University and a member of the National Academy of Sciences of the Republic of Korea.

About the Translator
Charles La Shure holds a doctorate in classical Korean literature with a specialization in oral literature from Seoul National University. In addition to his academic research, he works as a translator of academic and literary texts from Korean into English; recent previous translations include the novel Black Flower, by Kim Young-ha, and the novel Scenes from the Enlightenment, by Kim Namcheon. He is currently an assistant professor in the Department of Korean Language and Literature at Seoul National University.

To preorder a copy, go here, or order a Preview comprising the title summary, Table of Contents and Professor Cho’s informative Introduction to the volume.