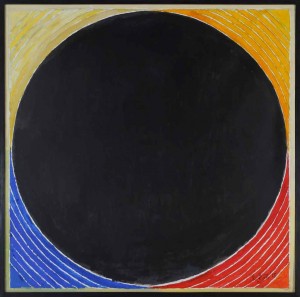 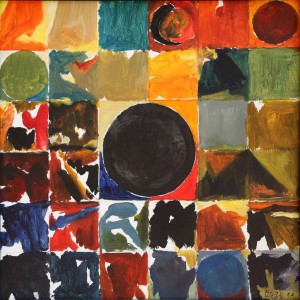 Syed Haider Raza, born 1922, has lived and worked in France since 1950. His formal education, including Nagpur School of Art, Nagpur (1939–43), Sir J J School of Art, Bombay (1943–47) and École nationale supérieure des Beaux-Arts, Paris, encompassed both eastern and western influences, but his strong affinity with India continues to find expression in his new work, including the selection of paintings featured in this show.

During a career spanning over seventy years Raza has helped redefine the perception of Indian art both within and outside of his homeland, and is widely regarded as one of the founders of the modern art movement in India, having co-founded the Progressive Artist’s Group in Bombay in 1947 with his contemporaries FN Souza, MF Husain and K H Ara. This group of artists sought to break free from the artistic shackles imposed in Indian classrooms where the teaching was based upon traditional Western ideals and techniques. At the time their radical new vernacular was revolutionary and paved the way for other notable artists such as Akbar Padamsee and VS Gaitonde to further radicalise modern Indian art

In 1950 Raza moved to Paris and it was there that he found true artistic freedom. His paintings from the 1950s are characterised by the use of thick impasto and depict landscapes that are far more representational than abstract. In the 1960s Raza’s style began to change and his landscapes became ever more removed from reality before becoming totally abstract by the early 1970s. This period of Raza’s career can be viewed as a transitional one, during which his style and subjects developed into complete abstraction, and the geometric shapes appear that were to characterise the later part of his career.

The vivid colours and scenery of rural India remained with him long after he left India, and were to have a profound effect on his work from the 1960s onwards. Raza’s strong ties to nature, specifically the forests of Madhya Pradesh, are at the root of his paintings, and manifest themselves predominantly through his use of colour. In the 1980s Raza distilled his landscapes into geometric blocks of colour, with each part having a distinct association with the natural world. The compositional elements and the vibrancy of colours used to represent the elements are central to his works from this period. Another important aspect seen in his later works is the incorporation of religious symbology and folkloric imagery such as the Bindu and Yoni into his paintings. These mystical elements further displaying his ties with India, as well as adding a purity of form.

Pyaas is the latest working of the artist’s long held aesthetic ideals, the paintings from which contain a great deal of vigour, vibrancy and a strong connection to India and its religious heritage. “Syed Haider Raza is India’s greatest living artist and rightly holds a place as one of the pioneers of modern art in India,” gallery director Conor Macklin said. SR