Madagascar, but not as your kids know it

Home » ARTISTS » Madagascar, but not as your kids know it

Posted By Editor on May 3, 2014 in ARTISTS, Contemporary art from Africa and African communities, LISTINGS, NEWS

Thanks to the ongoing Dreamworks franchise (there may be a fourth animated sequel soon), Madagascar is firmly and mirthfully on the world map, its mind-boggling menagerie embedded deep into the consciousness of children who’ll soon be teenagers, given the series’ debut in 2005, and surely will be taking their toddler siblings along a well-beaten path, writes SAJID RIZVI.

But there’s another aspect to the art of Madagascar that’s currently having its very timely and well-deserved exposure in London’s Gallery of African Art. Last year’s 1:54 African art fair created new audiences for African art, many including avid followers of African creativity beyond the scope of academic discourse and certainly outside the much maligned and often suspect domains of coffee-table tomes of touristic or voyeuristic Africa. 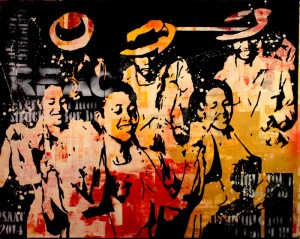 The Cork Street gallery’s group exhibition of works by six artists from the island nation is part of a Pop-Up Africa programme of art events that satisfies the need for swiftly arranged and in most respects time-sensitive expositions that headline unknown artists — or artists not known to international anglophone or western spheres.

In this Pop-Up Africa edition, GAFRA collaborated with Is’Art Galerie in Madagascar, its leading light Tahina Rakotoarivony one of the artists featured in the show. Most of the six in the group whose art is displayed live and work in Madagascar and GAFRA explains it selected works to reflect the breadth of artistic practice on the island — “from the very urban works of Isaac Azaly to the more traditional inspired sculptures by Temandrota.”

The work of Tahina Rakotoarivony is arrayed on the gallery’s two floors alongside diverse works by Temandrota, Isaac Azaly, Éric Rakoto, Vonjiniaina and Ambi (Ambinintsoa Andrianjakarivel), who lives and works in France and was at hand during the opening. As expected, artists with limited access to art materials employ found objects with varied efficacy. Temandrota’s compositions, a singular genre of collage/tapestry held together by glue and other media, recall other African master/manipulators of found objects, including El Anatsui. There’s much burning and singeing of media in evidence, mainly to evoke shades of earthy browns associated with Africa by both practitioners and their audiences. Ambi, of Southeast Asian heritage, offers in her works on canvas and paper references to monochrome ink painting of China and its environs. In the process she appears to throw an occasional conceptual dart in the midst of a work on singed antemoro paper, an indigenous variety of bark akin to mulberry. One particular work,  intriguingly titled Price Peace Please, sports an inviting everyday (found object?) stringed tag, snagged in the middle of the artwork for anyone daring to take up the pricing challenge.

Founded in 2011 Is’Art Galerie is reputedly the only contemporary art gallery operating in Antananarivo, Madagascar’s capital, a town continuously inhabited since 1625 and still bearing many vestiges of French rule 1897-1960. A visit to the gallery’s French-language website http://www.isart-galerie.mg/ reveals a vibrant hub of cultural activity, including music and residencies. The island’s other major influence, of course, is Arab/Persian/Islamic.

The gallery space is dedicated to the promotion of Malagasy contemporary art, a diverse mix that draws on cultural traditions of Africa as well as of its many inhabitants who trace their origins in southern Borneo, other parts of Indonesia and the Philippines. The architecture, cuisine and musical traditions of Madagascar are informed by the Asian settlers’ cultural legacy but African mainland influences are equally omnipresent. Both get a fair airing in this well-chosen and informative exhibition, a pioneering effort that opens new windows for Madagascar’s Malagasy art in the English-speaking world after some tentative exposure in francophone Africa and Europe. ©SR