Posted By Editor on Jul 15, 2016 in Featured, Saffron Asian Art and Society Series 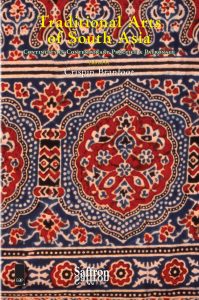 Crispin Branfoot, editor of the book, Traditional Arts of South Asia: Continuity in Contemporary Practice & Patronage, introduces key topics and authors in this ground breaking new publication, published by Saffron:
What are the proper subjects for a study of the arts of India? If we were so bold as to define ‘the canon’ of South Asian art, even when the very idea of the canon has been subjected to so much deserved criticism, scholars would probably agree about the main elements.  We would want to examine the historical development and meanings of architecture for the varied and interwoven religious communities of South Asia beginning in the third century BC—Buddhists, Hindus, Jains.  Sculpture in stone, terracotta and metal would be central, discussing the numerous images of deities and superhuman beings that animated these buildings and were the focus of ritual.  The formation of Indo-Islamic art and architecture after 1200 would be an important theme.  We would want to examine the early paintings on walls or palm-leaf for use in religious contexts, and the refined, court paintings on cloth and paper for the Mughals and their contemporaries from the sixteenth century and later.  Perhaps we would also include the architectural legacy of the successive European colonial powers, and some other aspects of the dialogue between Europe and South Asia, such as ‘Company’ painting in the early nineteenth century.  If space in the book or curriculum permitted, perhaps some metalwork, jewellery or textiles might be mentioned (Figure 1.1).  With such visual riches, surely nothing is missing?
It is curious therefore that in most recent academic discussions of the visual arts of South Asia produced in the past two centuries, there is little mention of the material—the temples, sculptures, religious and court paintings—that had been so important in the history of the arts up until 1800.  Have no temples been produced in the last few centuries? Are the sculptures made in this period simply not worth studying? Have historians of South Asian art assumed that another discipline is studying this material? This book aims to take another view of the traditional arts of South Asia produced in the past two centuries and assess their role in both the understanding of the past and in current practice.  The contributors come from a variety of disciplines to reflect the different aims and approaches currently pursued toward South Asian traditional arts and include art historians, practising artists and architects, and anthropologists.  The broad aim is to juxtapose material often examined in isolation, if at all, and emphasise the plurality of approach and diversity of visual media produced and consumed in the dynamic and varied cultures of South Asia over the past two centuries.
The authors’ contributions address to varying degrees three key themes: How can a historical and theoretical understanding of traditional South Asian arts inform contemporary artistic and architectural projects, both within and beyond South Asia? How can an understanding of contemporary practices and design issues inform the study of art and material culture in the past? How have changing conceptions of art and craft influenced the study, understanding and practice of South Asian traditional arts?