Posted By Editor on May 22, 2014 in ARTISTS, Contemporary art from Africa and African communities, LISTINGS, NEWS

Chronicles of The Enchanted World is the title of a selling exhibition of a selection of paintings and sculptural installations by Victor Ehikhamenor, on display 21 May -19 July 2014 at London’s Gallery of African Art, writes SAJID RIZVI.

Ehikhamenor’s reputation traverses disciplines. He’s an artist and photographer, raconteur and writer of short stories and, imminently (we hear), a novel.(1) There’s something naughty and noble about that ever expanding repertoire of this artist, born in Udomi-Uwessan, Edo State, Nigeria, in 1970, educated at Ambrose Ali University, Ekpoma, Nigeria, then at the University of Maryland in the United States.

The naughtiness is already legend, documented in art, essays, photography and verse. There’s little of Africa, western Africa specifically, that Ehikhamenor won’t poke fun at, in his inimitable style of lyrical mild mischief.

In Excuse Me! (Parresia Books, 2012), a collection of essays, he famously lamented the receding art of love letter writing, a youthful activity of yore that, he recalled in a BBC interview, honed his literary skills. Not for him the language of love and longing espoused by today’s humanity attached to its mobile devices.(2)

American Invasion, a satirical set of photographs of people clothed in T-shirts and tops evocative of icons and locations in the United States, is in some ways a tribute to E C Osundu, the Caine Prize winning author of Waiting, where protagonist Orlando Zaki relates how all the children in the refugee camp are named after words on their donated attire.

The poet in Victor Ehikhamenor appears to have lived alongside the visual artist. His Sordid Riuals poetry compendium (2002) predated Excuse Me! Some published conversations indicate that early experiences comprised both oral history and impressions of icons and imagery around him.

“I started painting at a very early age, and older people called me ‘artist’ even before I knew what the word meant,” a text part-edited by Eclectica.org relates. “I was always fascinated by the figures, designs and colours that saturated my village when I was a child. Art, mostly functional, was abundant in my environment in Nigeria. Almost everything was art, ranging from my grandfather’s staff of office as the odionwele of my village, to the different wall designs by his seven wives and the clothing worn by men and women, especially on Sundays. As a young boy, I painted on any surface that was smooth enough. School slates, notebooks, my mother’s walls (which got me in trouble most times), even in the sand along my village streets. Those early experiences always snake into my current pieces, though my newer works are constantly evolving.”

And he told blogger ‘Miss (Olushola) Ojikutu’ in 2013, “I grew up in a city-like village, where we had pretty much everything, including no-nonsense uncles and aunties, and prayerful grandmothers and grandfathers. At age ten, I started writing letters for old village folks who didn’t have Western education—which meant I had to translate Esan to English. I guess that can be said to be the beginning of my writing life.” This is also where the ‘noble’ side of Victor Ehikhamenor comes into play as he continues to fulfil an exemplary role as a storyteller, historian and recorder of oral histories and contemporary commentator.

His recent tweets over events would make uncomfortable reading for powers that be: “In my village if u r a chief and ur girls are kidnapped and u do nothing after 30 days, the world can call you whatever they like.”

My favourites among Victor’s numerous gems of wisdom and biting satire, however, have to be the following:

“In my village when you have a cutlass in your hand and you are running from a man with a cane, your head is not correct.”

“In my village when you complain of been bitten by another person when you have your own set of teeth intact, you are a fool.”

All of the above and more are invoked in Victor Ehikhamenor’s characteristic style in the GAFRA exhibition, which he describes in an artist statement as “a telling of accumulated constructed other-worldliness pictorial stories of realities.

“These works in their different shape and style approach the use of traditional material from the atypical corner of a storyteller. The paintings and sculptures propose that the artist’s canvass can stretch his/her narratives farther than the restraining corners of stretcher bars. What would a painting on a sculpturally constricted canvas look like? What ancient tales would a hand-made paper perforated with nails tell? Will a free flowing extra-large canvas filled with signs and symbols borrowed from the walls of village shrines and sacred altars tell the story of a cherished yet divided childhood? 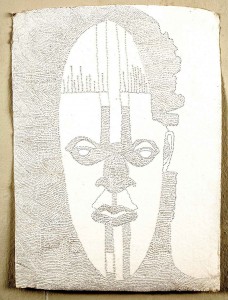 “Encountering the works will answer some of these questions but it will also send viewers into further phantasmic journey filled with their own interrogations,” Ehikhamenor says in his textual prelude to the show, which includes both his works on handmade paper, rendered in relief by incisions of the material by nails, and abstract canvases that recall the attire, both everyday and festive, of ladies in Nigeria and beyond it in other parts of Africa.

Each canvas installation folded into fluid shapes ensures the artist will always need to be at hand to bring the canvas sheets to life wherever the show goes.

“In my works there is almost no dichotomy between the real and the spiritual, home-grown religion and
borrowed transcendent beliefs, they are one and the same. When they are confronted, the canvases
and sculptures present assorted human expressions and forms of existence. At first, they can be abstract,
but when enough time is spent the figures assume the viewers into their own lives and their hidden
personal narratives like a griot grabbing his audience to a fabricated world. 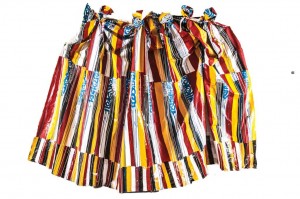 “The narrative structure of these works function as overblown paranormal (re)construction of my outer
and inner self, the conflict of past and present, identity and belonging, the past and the present, rites and
religion, events and history in all its disrupted form. They make me the chronicler of memories,” Ehikhamenor says.

“In my works there is almost no dichotomy between the real and the spiritual, home-grown religion and
borrowed transcendent beliefs, they are one and the same.” he adds.