Posted By Editor on May 22, 2014 in Art Markets, ARTISTS, Contemporary art from Africa and African communities, LISTINGS, NEWS

More African individuals and businesses are spending on or investing in art than a few years earlier, with the focus on contemporary art produced by artists on the African continent or in  locations elsewhere , anecdotal evidence and art market trends suggest. There’s also an emerging trend toward restitution of historical cultural materials now outside Africa. 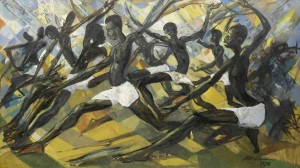 At Bonhams’ sale 21 May 2014, entitled Africa Now and billed by the auctioneer as a celebration of art from across the African continent, the works that drew most buyers were largely made by Nigerian or Ghanaian artists resident in those countries, lately deceased or settled in Europe or the Americas. Bonhams said the sale made a total in excess of GBP 1 million ($1.67 million) and set new world record prices for at least 10 different artists.

The Flight depicts a young family in native Yoruba dress, seated on a bicycle. The artist began the work during the Nigerian civil war (July 1967 -January 1970), and the sight of civilians abandoning their homes to escape the soldiers is said to have reminded Grillo of the flight of the Holy Family from Israel to Egypt: a saw can be seen along with their baggage; a reminder of Joseph’s profession as a carpenter. 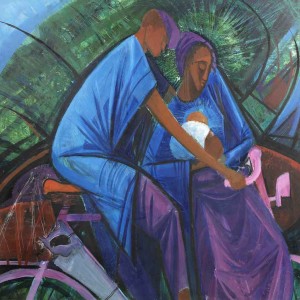 A wooden sculpture by Ghanaian artist El Anatsui (born 1944) titled The Clan sold for GBP 27,500. Now an internationally celebrated sculptor, El Anatsuit’s work is displayed in public institutions around the world, and a major touring exhibition of his work is currently on show at the Bass Museum of Art, Miami, Florida. See links below related to El Anatsui’s work.

On Monday 19 May 2014 Bonhams hosted a charity auction of contemporary Angolan art. Angola received international recognition 2013, when their pavilion at the Venice Biennale was awarded the prestigious Leone d’Oro. Such is the interest in this emerging art market, from international art collectors and speculators alike, that fiercely competitive bidding on the night resulted in a ‘white glove sale’, with 100 percent of the lots selling.

Hannah O’Leary, Bonhams Head of Contemporary African Art commented “Since our inaugural Africa Now auction just five years ago, this market has gone from strength to strength. While artists from at least fifteen African countries were represented, the top prices were reserved for the best pieces by the Nigerian Masters, which seems appropriate for a country celebrating their centenary and that recently became Africa’s largest economy.”

Historical materials, including what the auction industry defines as tribal art, are sold in separate auctions.