Posted By Editor on May 1, 2014 in ARTISTS, Contemporary and modern art from the Chinese world and Chinese communities, LISTINGS, NEWS

This year’s edition of the annual Chinese Visual Festival in London is in full swing, offering audiences opportunities to get up to speed with new talent and new trends in Chinese cinema, from the mainland to countries and regions contiguous in cultural or historical terms. 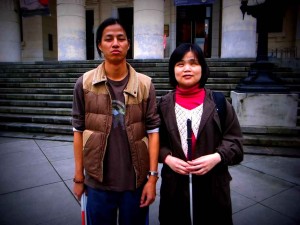 The Way We are

Mainstream moviegoers, having been introduced to Chinese cinema through circuitous routes including Hollywood and Hong Kong, are only now beginning to catch up with a virtual explosion of growth in mainstream film-making. A general tendency to compare the growth in Chinese cinema with other emergent film-making can be — unsurprisingly — unrewarding. The festival aims to highlight developments in Chinese cinema that rightly can be considered unique to the industry.

The festival says it will be fielding three directors, Jia Zhangke, Pema Tseden and Chen Yin Yen, and more than 40 films, some of which will be marking their international or UK premieres.

A full line-up features screenings 7-18 May at King’s College London, events at Riverside Studios, London W6, with DocHouse and at the British Film Institute.  Tickets are now on sale via the festival website: chinesevisualfestival.org

Jia Zhangke and Pema Tseden are rated by the festival as two of the most important filmmakers in modern independent Chinese language cinema.  In addition to a preview of A Touch of Sin at the BFI, Jia will be in conversation at King’s on 10 May during a screening of his early and rarely seen short films, including Xiao Shan Going Home, Cry Me a River, In Public and The Canine Condition.  Acclaimed Tibetan director Pema Tseden opens the festival with Old Dog, with a full retrospective of his works being held during the following week. Pema will also take part in Q&As, a discussion on Tibetan culture and a Chinese language filmmakers workshop in which up-and-coming local directors screen and debate their works.

CVF continues its tradition of screening the best in contemporary Taiwanese documentary and indie cinema in the Vision Taiwan strand, featuring seven carefully selected films and headlined by The Way We Are from director Chen Yin Yen.  Chen will be at the festival, introducing his challenging and highly affecting documentary on 9 May, as well as taking part in other events.  Vision Taiwan will be an on-going program in collaboration with the Taiwanese Ministry of Culture, with other events to follow throughout the year.

The CVF team has travelled extensively around the Chinese-speaking world to bring UK audiences the very best in cutting-edge independent filmmaking, including documentaries, fiction, shorts and experimental cinema.  The 40+ films cover a range of contemporary genres and issues with strands focusing on works from mainland China, Hong Kong, Taiwan, Singapore and beyond.  Highlights include gangsters in Burned Wings and E Huang Mountain, humanist documentaries like Blossom of Tears, and a rich selection of experimental cinema including Deformity Sci-Fi, Martian Syndrome, and Kun 13: Criticising Ai Weiwei and Wu Haohao.

CVF is working for the first time with DocHouse on the Voices from China Now program, held at Riverside studios on 12 May.  The evening includes screenings of Zheng Kuo’s award-winning documentary The Cold Winter, focusing on the struggle of artists against land developers near Beijing’s famous Chaoyang District 798, and Little Proletarian, Shen Jie’s wild look at troubled youth in a small Chinese town.  CVF is collaborating with Newcastle and Nottingham Universities in holding a celebration of ten years of the China Independent Film Festival (CIFF), one of the most vital and enduring Chinese language film events. To help mark this remarkable anniversary, CVF will be hosting a special animation session, as well as welcoming CIFF’s Cao Kai and Zhang Xianmin for what promises to be a fascinating panel discussion.

CVF guests will be joined by a rich variety of leading academics and key figures in the film industry and related social studies, who will take part in Q&A sessions as well as a programme of talks and symposiums, making the festival a lively forum for discussion and debate.  This year, audiences will also have the chance to attend sessions with noted writer, commentator, film festival programmer and screenwriter Tony Rayns, who will be presenting his fun and informative lecture The Secret History of Independent Chinese Films.

CVF Film Curator Xie Jingjing commented, “The line-up of films at the festival this year is our strongest and most varied yet.  There really is something for everyone, from action and drama through to challenging documentaries, animation and innovative art cinema, and we’re very proud to be offering audiences the chance to see films they wouldn’t otherwise be able to.  Many of our filmmakers make their films with their own money, at great personal cost and sacrifice, and it means a lot to be able to help them have their voice and to let them tell their fascinating stories.”