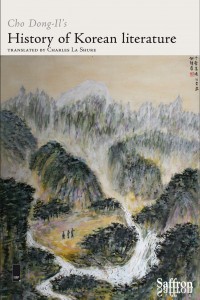 Saffron Books’ forthcoming Cho Dong-il’s History of Korean Literature is a magisterial work, perhaps the most comprehensive narrative on the subject in any language other than Korean, encompassing milestones, events and personalities in one of the most engrossing bodies of world literature, writes Sajid Rizvi, Publisher and Editor-in-Chief of Saffron Books. This monumental book, published in conjunction with the Academy of Korean Studies, Seoul, is part of Saffron Korea Library Series. Visit SaffronBooks.com.

This English translation of the six-volume original serves as a foundation for and stepping stone to further study of Korean literature. In developing this edition, Saffron has introduced numerous features that are not part of the Korean edition, including comprehensive indices. The cover of the book features a painting by the author.

Cho Dong-il’s History of Korean Literature traces the development of Korean literature from its beginnings in paleolithic times through the ancient and medieval eras, the important transition from medieval to modern Korea, and the Japanese colonial period, which ended in 1945.

Dr Cho, a pre-eminent scholar of Korean literature, demonstrates how inextricably the threads of history, literature, and philosophy are interwoven, providing the necessary background to understand Korean literature as an unbroken tradition of thousands of years. His theories of literary branches and tendencies, as well as his unique understanding of the relationships between historical eras, provide a deeper and more flexible framework for interpreting Korean literature than traditional genre and periodization systems. Lastly, he goes beyond regional boundaries to examine the place Korean literature occupies in world literature.

This edited translation serves as an introduction to Korean literature, maintaining the important theoretical framework and underlying theories that make Dr Cho’s work the premiere textbook that it is in Korea, but also focusing on the more significant aspects of Korean literary history so as not to overwhelm the reader.

About the Author
Professor Cho Dong-il has been teaching Korean literature for 45 years, primarily in Korea but also in France, Japan and China. He has spoken to academic audiences in sixteen countries around the globe. His contributions to the fields of Korean literature and Korean Studies include over seventy books and over two hundred papers; of his recent books, A Theory of Learning (2012), serves as an approachable introduction to and summary of his vast body of research, while Where Now for Literary History? (2015) offers his thoughts on the future of the discipline. He is currently professor emeritus at Seoul National University and a member of the National Academy of Sciences of the Republic of Korea.

About the Translator
Charles La Shure holds a doctorate in classical Korean literature with a specialization in oral literature from Seoul National University. In addition to his academic research, he works as a translator of academic and literary texts from Korean into English; recent previous translations include the novel Black Flower, by Kim Young-ha, and the novel Scenes from the Enlightenment, by Kim Namcheon. He is currently a professor in the Department of Korean Language and Literature at Seoul National University.

This book is an abridged translation of my Hangungmunhaktongsa (A Comprehensive History of Korean Literature). The first edition of that book was published between 1982-1988*, the second edition appeared in 1989, the third edition in 1994, and the fourth edition in 2005. All editions of the book have been published by Jisik Sanup Publications, Seoul. Hangungmunhaktongsa comprises six volumes, including an extensive and separate appendix. It deals comprehensively with all aspects of Korean literature and delves deep into the specifics of research in the field, and thus is not suited for the wider foreign audience. For some time I had felt there was need for a single-volume version of this substantial body of research and had begun work towards that objective early on. My long collaboration with Dr Daniel Bouchez resulted in the 2002 publication of Histoire de la littérature coréenne des origines à 1919 (History of Korean literature from its beginnings to 1919) through the French publishing company Fayard. We were co-authors and co-translators of this book.

I began a similar collaboration with Dr Marshal Pihl in the United States, but the project sadly was abandoned after Dr Pihl’s passing. I resumed my search for a collaborator to continue the project. My efforts, fruitless at first, were finally rewarded and my hopes fulfilled when I met my collaborator for this volume, Charles La Shure, an American academic colleague.

After coming to Korea, Charles La Shure entered the graduate school at Seoul National University and received master’s and doctoral degrees. He is familiar with both the Korean language and Korean literature, and during the long time he spent studying with me, he gained a detailed understanding of my academic theories. He has taken my lectures and also helped in my research. He majored in creative writing as an undergraduate in the United States, and his English writing skills are excellent. He also has experience translating Korean literary works into English, and has achieved outstanding results through these efforts. He is the most qualified individual for the task of creating an English edition of Hangungmunhaktongsa. The Academy of Korean Studies did not hesitate to support us with a grant, allowing us to begin the project.

In creating the English edition, we divided up the work load. I handled the general selection of material to be translated, while Dr La Shure took care of the smaller details. After Dr La Shure translated sections of the book, I read and examined these translations, and we worked together to address and correct any problems or issues. Of course, Dr La Shure invested the greater effort in this process.

The primary aim in selecting content was to make the finished translation easily understandable for English-speaking readers. We decided not to include content that was too complex or intricate, making it difficult to translate or requiring too many unfamiliar terms and proper nouns. We dealt in brief with early literature and in more detail with later literature. Both the main text and passages quoted from literary works were translated with readability in mind. The bibliographies included at the end of each section in the original work have been omitted. For these reasons, the English edition has not a few inadequacies. It is our hope that this book will serve rather as a guide to Korean literature for English-speaking readers, and that readers wishing to explore Korean literature further will make an effort to study the Korean language and read the original Korean edition, Hangungmunhaktongsa.

[Thanks to Drs Cho and La Shure for providing this translation]