New book and exhibitions on Mohan Samant, his life and paintings

Home » ART » New book and exhibitions on Mohan Samant, his life and paintings

The artist Mohan Samant was described by Ranjit Hoskote, by way of a compliment, as “the missing link in the evolutionary narrative of contemporary art in India.” Now a book on the life and work of this extraordinary but little known artist has been published in an impressive tome coinciding with a London exhibition and a major retrospective in Mumabi, writes SAJID RIZVI. 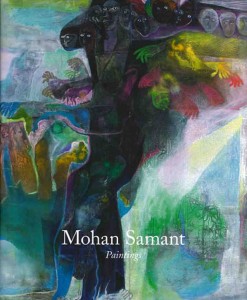 Mohan Samant: Paintings, by Ranjit Hoskote, Marcella Sirhandi and Jeffrey Wechsler, published 15 October 2013 by Mapin Publishing, Ahmedabad, India, evaluates both Samant’s work and its context during his early years in Mumbai, which shaped his aesthetic, and his later and final years in New York, his adopted home.

The book was launched at the Nehru Centre, London, where a selection of works by Mohan Samant is on show to 25 October 2013.

The comprehensive two-volume publication offers exploration of the artist’s styles and techniques, the themes and subjects in his paintings and his process — the latter examined through X-ray imaging of several of his works.

A New York City resident for more than 30 years before his death in 2004, Mohan Samant was always a son of India, the book argues. Prior to that, during his Mumbai years right up to the 1940s, the city offered few places for modernist painters to exhibit and the art environment in the Maximum City (of Suketu Mehta, 2004) was conservative.

Samant used scholarships to the United States and Italy to travel and imbue himself with world art and architecture, prompting him to say “my influences come from the entire panorama of art history.” A regular museum goer, Samant opened himself to learn and be inspired. His was an “archeological imagination,” says Ranjit Hoskote.

In a New York alive with Abstract Expressionism in the 1950s and 1960s, Samant nonetheless stayed too close to his Indian roots to permanently commit to painting devoid of representational imagery. His predilection for unnatural juxtapositions, whether shapes or colours, and preference for a crowded composition with placement of figures both large and small, are both common practices in Indian miniature painting. The impulse toward subject matter was a constant in his art, even during his most abstract phases. His works are often described as “a gift of excess” — the partnership of a voracious eye and a versatile hand. His long absence from the Indian art environment, considered by many critics to be a “tragedy” (Hoskote), and his individualism in the midst of the New York art scene made him, in some eyes, “an inhabitant of the in-between.”

Mohan Samant’s techniques, imagery, styles and subject matter are so vast as to defy enumeration, argue the autors. Pressed butterflies and dried insects vie with plastic toys for aesthetic and iconographic recognition on his vast canvases. His goal was “to manipulate varied forms and materials which on their own may not have aesthetic possibilities.” He was unfazed by unusual materials and could lavish intense attention and imagination upon the manufacture and imagery of a single piece. His signature processes in representation were paper cut-outs and wire manipulation.

Receiving the Asian American Heritage Award from Hillary Clinton in 2000, he was described as “a multimedia artist and a noted sarangi musician.” Samant’s paintings are in the collections of the Museum of Modern Art, the National Gallery, the Renwick Gallery in the Smithsonian Institute and the Hirshhorn Museum in Washington. He continued to exhibit in India with a solo exhibition at the Jehangir Art Gallery in Mumbai in 2000.

The book’s publication coincides with the 50th anniversary of the Dunn International exhibition in 1963, which featured and introduced Samant’s work to new audiences. The show travelled to the Tate Gallery, London. The selection committee that chose Samant’s work alongside that of Edward Hopper, Robert Rauschenberg and Willem de Kooning, included Sir Anthony Blunt, London, and Alfred Barr, the Museum of Modern Art, New York. Samant was one of two newcomers singled out for special recognition by Time magazine.

In addition to the London exhibition at the Nehru Centre (8 South Audley Street,  London  W1K 1HF. T [020) 7 491 3567]) a retrospective of Mohan Samant’s work is on view to mid-February 2014 at the Jehangir Nicholson Art Foundation at CSMVS in Mumbai, India.