Malangatana: Homage to an African visionary

Posted By Editor on Mar 14, 2014 in ARTISTS, Contemporary art from Africa and African communities, LISTINGS, People

The Gallery of African Art, Cork Street’s eminent new venue showcasing contemporary and modern art from the continent, has produced a deeply evocative tribute to Valente Malangatana Ngwenya, better known simply as Malangatana, arguably one of the great creative spirits and gifted visual storytellers to emerge from Africa before his death in 2011, writes SAJID RIZVI. 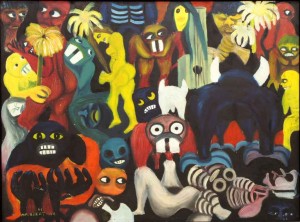 The painter/poet/philosopher, part-time guerrilla fighter and former prisoner of colonial Portugal (where he died at the age of 74), is recognised only in patches of African art history, partly because of an academic tendency to split Africa into anglophone, francophone  and lisophone subdomains before proceeding further south to make more — and often gratuitous — markings on Africa’s artistic landscape. There’s, for instance, another East Africa, mostly English-speaking, distinct from Mozambique and there’s of course Southern Africa and Southwest Africa with their own distinctive art histories, some contrived and not necessarily relevant if one seeks to forge a more cohesive if not yet entirely integrated history of modern or contemporary African art.

This well-researched retrospective brings together Malangatana’s pencil and ink drawings on paper as well as paintings produced over more than four decades, including works already known and celebrated outside Africa.

The Matalana in the gallery exhibition’s title refers to the village in the old colonial Mozambique where Ngwenya was born 6 June 1936.  Early life in missionary schools, economic challenges of everyday existence and the need to make a living from pre-teens onwards apparently did not deter young Ngwenya in his pursuit of education and art training. Malangatana’s first group show in 1959 drew critical acclaim and his first individual show marked a sensational debut with a 1961 composition on masonite (branded hardboard) that articulated and drew wide attention to his as yet unrecognised talent, at that time represented by a bright palette, elaborate composition and bold forms.

Early themes in Malangatana’s work drew upon his childhood upbringing in rural Mozambique. As a curatorial text points out, folklore, mythology, religion and family life provided the inspiration for much of his art during this period. Surely his mother’s vocation as a tooth sharpener, a practice familiar to societies as far apart as Aboriginal Australia, China, Indonesia (Bali) and Vietnam, and central to fashion, social ritual and spirituality in about as many diverse settings worldwide, would have left its mark on Malangatana’s formative years.

There’s no denying either  that the boy artist’s encounters with European colonialism fed into a maturing of consciousness that led to political confrontations and conflict that put his personal well-being in peril. That experience also produced art with more than a dash of social comment, indeed it signalled his foray into full-scale political activism. Malangatana’s brush with the Portuguese secret police while Portugal and its colonies toiled under dictatorship in Lisbon also influenced his work. 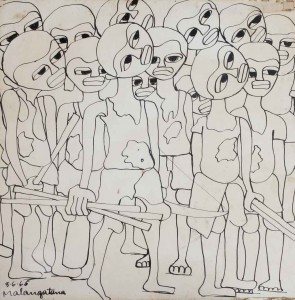 Malangatana 1965, Untitled, Ink on paper glued to masonite board. Photo: Gallery of African Art, London. Click on image to enlarge

Early pencil drawings depict with economy of line the suffering endured by ordinary people in a toxic chemistry of chronic poverty and colonialism, with bared pointed teeth, protruding eyes and screaming heads recurring motifs in works from that period.

International awareness of Malangatana’s work remains sparse outside the relatively small community of collectors and connoisseurs of contemporary African art, though this is rapidly changing. A welcome transformation of the contemporary African art scene in London and by extension in Britain and perhaps a little beyond is well overdue almost two decades after the seminal africa95. This is evidenced by the emergence of two major African galleries in London (the other being Tiwani Contemporary in Little Portland St, W1), the 1-54 art fair, the Tate Modern’s belated but very substantial entrée with a well-received offering last year of Ibrahim El Salahi’s modernist abstractions and calligraphies and Meschac Gaba’s daringly conceptual Museum of Contemporary African Art. Art entrepreneur Charles Saatchi is dipping his foot in it, too, with  Pangaea: New Art From Africa and Latin America opening at Saatchi Gallery in April, an event at least partly a continuation of his ‘conversation’ with Tate director Sir Nicholas Serota. ©SR

Africa in Britain, Britain in Africa and Beyond

Artists and Art Education in Africa