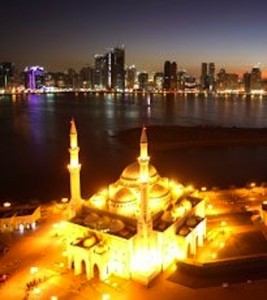 Sharjah in the United Arab Emirates is fast emerging as a cultural counterpoint to Dubai. It recently celebrated its new status as the Capital of Islamic Culture 2014.

In 1998, Sharjah was named the ‘Cultural Capital of the Arab World’ by UNESCO, an honour Sharjah says it “richly deserved.” Sharjah says it has kept the spirit of its history alive by innovatively incorporating tradition into every aspect of contemporary development. “The result is a vibrant, modern Emirate that simultaneously looks forward to a bright future as it looks back respectfully to its history.”

UNESCO Director General at the time, Federico Mayor, asserted that the decision to select Sharjah as the cultural capital of the Arab World for 1998 was an auspicious one because of its importance to the region. He explained that the selection was not only based on the rich heritage of the city, but also on the kind of cultural radiance it emits and the role it plays in cultural milieu.

Sharjah was named the Capital of Islamic Culture for 2014 “in recognition of its remarkable contributions in preserving, promoting and disseminating culture at local, Arab and Islamic levels, under the guidance of His Highness Sheikh Dr. Sultan Bin Mohammed Al Qasimi Member of the UAE Supreme Council and Ruler of Sharjah,” says a Sharjah government statement. “The new title provides a boost to Sharjah’s cultural development and comes as a tribute to the Emirate’s offer of its Islamic cultural panorama, in the form of a host of cultural and Islamic events.”

Officials cite around 5,000 activities held across the emirate during 2013. The new cultural achievement crowned Sharjah for its leading cultural role at local, regional, Arab and international arenas, officials say.

Among the most prominent cultural achievements in Sharjah is the ‘Culture without borders’ project of establishing a library in every home. Based on the directions of The Ruler, 50 books will be distributed to every local family in the Emirate. The organizing committee is headed by Her Highness Sheikha Bedour Bint Sultan Al Qasimi, and the aim of this project is to promote and to emphasize the importance of cultural development among the families, especially the children.

With a budget for the project of Dhs 150 million, diverse books in the fields of religion, health, history and children’s stories will be delivered to 42,000 families, until the completion of the project in 2012. Below is an official summary of Sharjah’s representation for its fame courtesy of the Sharjah Commerce and Tourism Development Authority:

Sharjah has maintained its cultural traditions that date back to the days of the desert tribes and the influences brought about by their migration. Such skills and trades have been handed down by word of mouth and are still evident for visitors to discover and appreciate.

Pottery Jars Discovered at every archaeological dig are earthenware jars used for storing water and grain. Today, these are still fired in manmade wood-fuelled kilns. The various shapes and sizes of the water, grain and later oil jars, are displayed in the Sharjah Heritage Museum. New locally made pots are on sale in the Plant Souk in Al Jubail.

Bridal Chests These old Arabic chests, which are hard to come by were made throughout the Gulf, characterized by the solid wood (usually rosewood) with inlaid brass decoration and often secret compartments. Smaller wooden chests, with carved decoration only and many compartments were made specifically for the pearling industry. Pearls would be graded and stored in the boxes according to size, along with scales and other pearling paraphernalia.

Weaving and Embroidery In the past, girls in the family assisted in the making of their wardrobe, and traditional patterns of embroidery and dress style were handed down from mother to daughter. Arabian embroidery is a combination of rich and harmonious needlework on strong coloured textiles, characterised by a close worked, open chain stitch. Wrists, ankles and necklines are generally embroidered, often with fine gold and sliver thread, and sequins added for embellishment. The trim on the trouser is made from a narrow strip of foil to create a decorative edging. These traditional crafts are still popular pastimes amongst the national women.

Daggers and Knives Even up to the middle of the last century men would complete their attire by wearing a broad, silver embroidered waist belt and Khanjar (dagger). The coastal dagger of the emirates (Khanjar Sahily) is made of silver and highly decorated. Quite often, the bishak (knife) was worn instead of the dagger, particularly in the eastern area of the UAE. The carved wooden scabbard with chased and stamped silver decoration is further embellished with silver on both the wooden hilt and the iron blades.

Doors Traditional Arabic doors from the region are unique pieces of local heritage dating back 500 years. As well as being functional they are one of the most important forms of decorative expression to be found in the region’s forts and houses. The amount and quality of the carving depends on the price of the door and therefore the status of the household.

The Date Palm In eastern Arabia alone, there are over 50 different varieties of date palm, bearing many types and qualities of fruit at different times of the year. Here the natural maturing time for dates is in the summer between June and July.

Not so many years ago this precious tree was vital for survival in a land of scarcity. The fruit provided a major natural source of highly nutritious food that could be eaten (fresh, dried or drunk as a juice) all year round and all parts of the tree were utilised in various ways; the long thin leaves were dried and then woven to make mats, baskets, brushes, bags and bowls and used as roof matting for insulation; the mid-rib was a vital component in the construction of the Shashah traditional fishing boat; the trunk was hollowed out to form a mortar with the rest carved for the pestle for crushing wheat. Locally woven mats, baskets, bags and bowls are on sale in Souk Al Arsah and Souk Al Bahar.

Perfume and Incense These are an integral part of Arabic life for both men and women and are usually family run businesses. The three types of perfume and how they are mixed are a closely guarded secret. Attar is the oil based perfume, bukhoor is the fragrant burnt incense (formed by burning the wood chips) and the third is a wax sachet, which when burnt gives off a charcoal odour. You will find many perfume shops to explore in the area between Al Bourj Avenue and the Arts Area that sell the oils, the incense woods, perfume bottles and traditional burners made from clay, porcelain or silver.

Henna Made from the leaves of the lawsonia inermis shrub, Henna has been used for centuries to enhance beauty in the Middle East and India. Traditionally, henna is used to colour hair and to decorate the palms of hands and the soles of feet, especially for weddings and Eid celebrations. The colouring, which also contains cooling properties, will remain on the skin for several weeks before fading. In addition to Indian and Arab beauty centres which provide this treatment, you can buy henna in Souk Al Bahar, just in front of the Arts Area.