The second part of Saatchi Gallery’s New Order series opens 24 January 2014 with an impressive line-up of artists following the selections that featured in the first part which opened last year and ended 16 January this year. 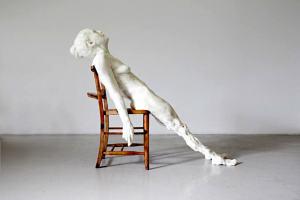 Virgile Ittah 2013, Regarding The Pain Of The Other

New Order is part of Saatchi’s programme of exhibitions that are dedicated to emergent British contemporary art.

As the gallery points out, the programme continues the Saatchi Gallery’s 25-year-long support of emerging artists and its drive to make contemporary art as widely accessible as possible. An entire floor has been devoted to exhibiting artists in the early stages of their careers, and enables young artists to have their work displayed in a museum environment. It also gives visitors to the Gallery a chance to discover some of the most exciting artists working in the UK.

New Order II: British Art Today features 13 artists who offer an arresting insight into art being made in the UK today. From sculpture and painting, to installation and video, this selection of artists employ a hybrid of traditional and contemporary techniques and materials, which revitalise existing visual languages.

Abstraction returns in the shape of interior décor in George Little’s paintings, with satirical intent in Dan Rees’ plasticine covered panels, or revived in unconventional and contrasting materials in Dominic Beattie’s pieces. Virgile Ittah’s wax figures droop as they succumb to gravity; Finbar Ward’s paintings are stacked on the floor like minimalist sculptures; and the sensory and sonic are embodied in Hannah Perry’s immersive installation.