Limits of a Function: 3 artists at London Art Fair

Hanmi Gallery, London, has a group exhibition of works by emerging and established artists, employing new media and installations in their practices, at London Art Fair, Art Projects 2014. 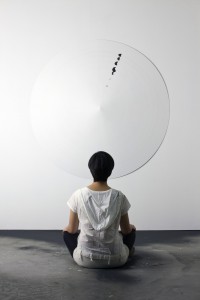 Featuring Joey Holder, Junebum Park and Sungfeel Yun, Limits of a Function takes a mathematical framework to consider the boundaries of international contemporary art and ‘measure’ its dimensions – exploring the threshold of artistic dialogue and its interface with the actual and the virtual.

Junebum Park engages in a visual discussion on the restraints of routine, confines of a set societal structure, and the expected submission into roles within these realms. The (in)visible hand of society on individuals and communities becomes apparent where the religious, familial, and cultural conflicts are all attended to.

The artist places particular consideration into his home country South Korea and East Asia. By photographing and rearranging commercial advertisements and commodities, Park evokes these pressures, manipulating the hand himself. Constructing impenetrable environments, he holds the presumed cultural and national identities accountable.

The fast-‐forwarded and controlled worlds created in Park’s works display the unsettling and automative realities of daily life. Park has exhibited and held international artist residencies including at the BizArt Center (Shanghai), Schinkel (Berlin), Chinese Arts Centre (Manchester), and Artspace (Sydney). He is the recipient of SIA Media Art Award 2012) and the Grant for International Exchange of Art and Culture, Arts Council Korea (2011).

Joey Holder’s work stretches over a variety of contemporary mediums, from sculpture and video works, to digital manipulations. Her virtual presence, which includes the use of social media and blogs, heightens the changing scenescapes of artistic practices of present day. She maleates and reveals elasticity in fractal forms, allowing for a new and decidedly contemporary response to romantic deliberation of organic forms. In testing the limits of the artificial and the natural, as well as questioning the function of the Internet and the digital age for art, Holder explores how and where contemporary works can be created and exhibited. In 2009 Holder’s work was featured in ‘Impossible Exchange’ for Frieze Projects, and in the same year she was shortlisted for the Red Mansion Art Prize. Holder’s works has been exhibited at Nottingham Contemporary, and the Digital Art Biennale. Holder was nominated for the 2013 Converse/ Dazed and Confused Emerging Artist Award in association with the Whitechapel Gallery.

Sungfeel Yun’s work embraces the scientific and ontological as a framework for realizing subtle yet energetic sculptural works. Presented in simplified, almost industrial aesthetic, Yun captures the mystery and pursues the boundaries of metaphysical thoughts. Avoiding the superfluous and flamboyant so as not to obscure the density of these vast concepts, Yun suggests that ancient philosophies and scientific theories are not as far removed from each other as we believe. His fascination with this subject began with painful episodes of bronchial asthma attacks during his childhood. In these fatalistic moments, Yun became preoccupied with the deceptively simple age-­‐old question, ‘What am I?’, which remains a pivotal theme in his works.