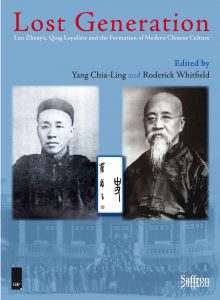 Until less than a generation ago the name of Luo Zhenyu was known to virtually everyone working on pre-modern China – certainly those working on early and medieval China. In some respects his scholarship has since been superseded—his studies of Tang biographical materials have been incorporated in more recent works, for example – and it is his publications of Dunhuang manuscripts or of collected inscriptions that tend to be cited nowadays rather than his original works.  But in one area, art history, the impact of his work has been so great and continuing that a full assessment has long been required, not least because his legacy cannot but be seen as problematic, for reasons extraneous to scholarship.

The violent and unpredictable upheavals of the twentieth century affected countless millions of lives much for the worse, creating victims enough for little sympathy to be spared for those whose chief loss was to their reputations, as a result of backing what turned out to be the wrong side. Luo Zhenyu (1866-1940), following the convention of continued loyalty to the dynasty under which he was raised, found himself at the end working for a puppet government generally recognised internationally as a distasteful sham.  Yet it is not the least of the virtues of this handsome and informative volume that it establishes beyond doubt that the Qing loyalist phenomenon was not some barely detectable backwash against the onward surge of progress and modernity but a substantial counter-current that indeed helped shape the modern perception of the Chinese past, especially the material past.

The eight contributions go in more or less two by two, after a couple of pages of Foreword by Roderick Whitfield and an Introduction of a dozen or so pages by Yang Chia-ling.  Wang Cheng-hua and Shana J Brown survey the possibilities for collectors that arose at the fall of the Qing, while Pai Shih-ming and Robert Culp look more broadly at what antiquity meant to Luo and his friends; Tamaki Maeda and Hong Zaixin examine Luo’s relation with Japanese art scholars and dealers; and finally Yang Chia-ling and Shao Dan look at the last years of Luo’s life in the context of the culture of Manzhouguo, the puppet state of Japanese Manchuria.

Every essay offers a wealth of detailed research, always richly illustrated – no list of figures is given, but by my rough count there must be at least one hundred and ten small or full-page illustrations scattered throughout the volume, from the beginning almost to the end.  Despite the place of publication there is an occasional hint of a somewhat transatlantic perspective: Yamanaka & Company (p67) did indeed have offices in Beijing, New York and Japan, but also from 1900 in London, where they were by no means the first Japanese dealers, but where even so by 1920 they had earned Royal Warrants from both George V and Queen Mary.  Yet in fact the way in which the essays shift from ancient China to the international business of twentieth century art and back is one of the most intriguing aspects of the book. Doubtless only a team of expert drawn from a number of backgrounds and expressing a number of slightly different outlooks could have provided as comprehensive treatment of Luo and his world as that put together here.  Doubtless, too, its exhilarating scope will stimulate further exploration of the complexities of the globalization of Chinese antiquity.

The volume is rounded out by three extremely useful research aids, compiled by the editors together or (in the case of the first) by Yang Chia-ling alone.   Here a few minor improvements suggest themselves, even if it should be pointed out that the editors leave nothing of real substance to complain about, and that they have succeeded in creating a book that is both readable and rigorously scholarly.  The first additional piece is an alphabetical listing of the ‘Circle of Luo Zhenyu’ (pp228-237), in itself no doubt a time consuming enough task, though inevitably the size of such a circle is rather a matter of judgment. Similarly the ‘Chronology of Luo Chen-yu (1866-1940)’ adheres to the Chinese convention of an annalistic biography in maintaining a fair degree of concision—and one cannot complain that the eight main essays do not fully compensate for this in the wealth of biographical information they contain.

The most challenging compilation, however, has clearly been the last, the ‘Publications of Luo Zhenyu,’ (pp283-296), in which a small number of errors and omissions may inevitably be found in an output as vast as that achieved by Luo over his career: it is worth pointing out that his complete writings as published by the Xilingshe in Hangzhou in 2005 runs to one hundred and eighty volumes, so a fully exhaustive bibliography was probably out of the question from the start.

But only one slim yet separately published work appears to have been overlooked entirely, and that perhaps quite pardonably so.  Paul Pelliot, in T’oung pao 29 (1932), p217, succinctly reviews a work of 31 pages in all by Luo entitled Benchao xueshu yuanliu gailue 本朝學術源流概略, An outline of the development of scholarship under the current dynasty, published in Dairen in 1930 by the Chinese-Japanese Culture Society.  Perhaps significantly, this was only the third review devoted by Pelliot to a publication by Luo, even if in his own scholarship he cites his writings quite freely.  The French scholar does take the opportunity to extract from this survey and pass on to his readers one item of bibliographical information of which he had been unaware, but otherwise his introductory sentence says it all:  “Appreciation de tendances extrêmement conservatrices”.

Luo Zhenyu wished devoutly that the Chinese imperial era had never ended; as it was, he literally traded on its past cultural production to sustain his resistance to modernity.  In the end, as this work shows, the international scope of his trading, and the new opportunities for promoting China’s heritage through publication, ended up creating something rather novel and unfamiliar that could not have existed in the old world of Manchu dominion under which he was born and raised.   In this paradox lies the fascination of his life, and of this fine collective volume.  The contributors and editors are to be warmly congratulated on filling an important gap in our knowledge. T H BARRETT |  You may buy this book here

Lost Generation was reviewed in the Journal of British Association of Chinese Studies and the review is freely accessible here:
http://bacsuk.org.uk/wp-content/uploads/2016/12/JBACS-6-text_fv.pdf

Editorial Note: The book was also reviewed in another academic journal, which is not being advertised here because the review, an earlier text by Professor Barrett, is paywalled and therefore inaccessible to increasingly impoverished students, except in a subscribing academic environment. SR