Baburnama in a new edition

A new edition of Baburnama, memoir of the Mughal Emperor Babur (1483–1530), founder of the Mughal empire in India, has been published by the Folio Society. 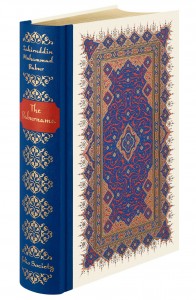 The Folio Society’s edition of Baburnama

Babur wrote the original text in Chaghatai, which he understood to be “Turki” (Turkic) and it was originally known as Tuzk-e Babri. A translation into Farsi gave the book its more familiar name, Baburnama (literally: book of Babur or Letter/s of Babur).
Babur’s grandson Emperor Akbar had the text translated into Farsi by his courtier Abdul Rahim and specially commissioned miniatures by court artists were added to the volume.

The mainly autobiographical work is replete with many phrases and smaller poems in Farsi and the narrative often is seen as a neglected classic. It is also regarded as the first extant autobiography in Islamic literature that offers insight into the history of Central Asia, Afghanistan and early India.

An early Persian version of the text was rendered into English in an acclaimed translation by Wheeler M. Thackston. There have been numerous other translations, including some from the original.
This is reputedly the first edition to show Akbar’s miniatures alongside an English translation of his grandfather Babur’s text.

The volume features a new preface by curator J P Losty, who co-wrote the catalogue to the major British Library exhibition, Mughal India, and an existing introduction by Salman Rushdie
Babur was also the author of the earliest known work of autobiography in Islamic literature. In frank and candid prose Babur describes his accession to the throne at the age of twelve; fleeing his birthplace of Fergana to avoid murderous relatives; his dramatic capture of Kabul, the city he would love all his life; and his conquest of India.

Babur describes, in intimate detail, his nomadic campaigns throughout Central Asia, and his conquest of Afghanistan – landscapes that remain at the forefront of current affairs today. This Folio Society fine edition is the first to be published alongside 49 of the miniatures produced in Akbar’s court in the 1590s.

These paintings are exquisite examples of the classic Mughal style of illustration, combining Persian draughtsmanship with Indian colours and sculptural forms. The binding is based on designs from the British Library manuscript.
Price GBP 120.